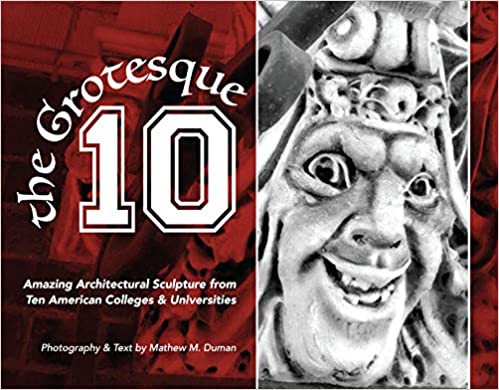 Published on 2021-02-07 by crockerfarmpgo Community News

Intrigued by gargoyles in architecture? Check out The Grotesque 10: Amazing Architectural Sculpture From Ten American Colleges and Universities, a virtual event to be hosted by the Jones Library via Zoom on Thursday, February 25, 2021 at 7 p.m.

Armed with only a camera, a sense of humor and a host of frequent flyer miles, Mathew Duman embarked on a “grotesque safari,” traveling to 10 universities around the country to photograph the unique grotesques and gargoyles roosting on their academic buildings. Mathew found that this type of sculpture makes its home within a style of architecture known as Collegiate Gothic which was popular in the 19th and early 20th centuries. He has collected his findings in his book called The Grotesque 10: Amazing Architectural Sculpture from Ten American Colleges and Universities and presents a selection in this illustrated lecture, giving you a taste of the variety of ornament, history and humor these campuses have to offer.

To attend this event, please register by sending an email to programs@joneslibrary.org. You must register with your email address in order to receive the link to participate in this Zoom event. The link will be sent to you by email approximately one day before the event. You will need a device with audio and/or video and an internet connection to join via Zoom.

Mathew Duman is a photographer, author, and graphic designer who grew up in Bethany, Connecticut. He attended the gargoyle-free campus of Central Connecticut State University, but while studying abroad, he developed a fascination with the grotesque sculptures of the cathedrals of Britain. In addition to England, Matt has made photographic trips to Italy, Africa, Australia & New Zealand. As a personal project, he began exploring the variety of sculpture found on the buildings of Yale University & published a book called An Education in the Grotesque, containing his findings at Yale. He has now turned his sights on the sculpture at other campuses around the US.

This program is sponsored by the Friends of the Jones Libraries.

(We appreciate your donations!)